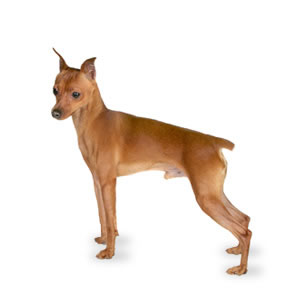 The Miniature Pinscher was originally bred in Germany to hunt vermin, primarily rats, in homes and stables. Many people think that the Miniature Pinscher was developed by breeding Dobermans to progressively smaller sizes, and indeed, the Miniature Pinscher looks similar to a Doberman. However, the Min Pin is a distinct and much older breed. Known as the "King of Toys" for his stately appearance and self-assured attitude, the Miniature Pinscher is a fearless, energetic, and alert companion dog who enjoys the company of his family.
Miniature Pinscher profile on DogTime.com
General Characteristics
Amount of shedding
Cold tolerance
Ease at being home alone
Ease of training
Friendly toward strangers
Intelligence
Playfulness
Predatory tendencies
Vigor
Potential for weight gain
Affectionate with family
Compatible with kids
Easy to groom
General health
Brought to you by